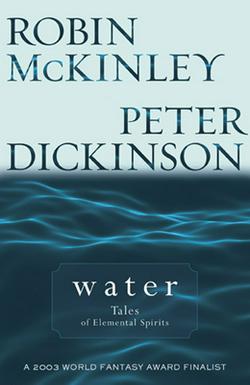 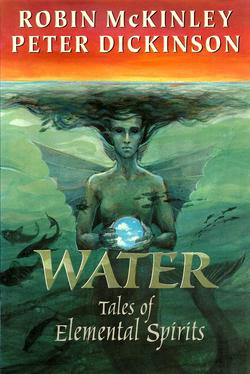 Water - Tales of the Elemental Spirits

Not long after Robin came to live with me in England she was asked to write a story about a mermaid to make a short illustrated book. She couldn’t think of a story-line so one evening we walked down to the village pub to try and dream something up. By the time we walked home in the summer dusk we had ideas for several stories about mermaids, sea serpents, seal-people and so on, and the beginnings of a grandiose scheme for a four-volume collaboration doing the same for the other three elements.

This suited me fine. In the course of writing almost any novel one hits a sticky patch where the thing has somehow gone off the rails and no amount of thought will get it moving. What it really needs is a bit of a rest, time to sort itself out while one thinks about something utterly different, a hell-hound or a phoenix, say. Drafts began to accumulate in my bottom drawer. It went less well for Robin. Her imagination is nothing if not prolific. Vampires would make a possible fire story because they burst into flames in sunlight. But there is so much to be known about the society in which this might happen. Say a dystopic USA after a World War III in which magic has taken the place of nuclear weapons and the residual dark powers still lurk in the shadows. So bang goes the Fire story as it explodes into a novel The world would be a poorer place without Sunshine, so I can’t complain. Anyway, she’s not the only one. My own The Tears of the Salamander began as a Fire story. And that’s why it took us seven years to get Water published in 2002, and another seven for Fire. At this rate I’ll be ninety-six before Earth sees the light of day, so Robin has given me permission to see if I can get one more story written to add to the five that have been sitting in my drawer all these years and produce my own single Earth and Air volume. And then find someone to publish it.