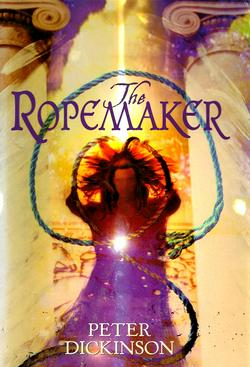 High fantasy novel about people from a simple and unmagical valley journeying through an all-controlling and magic-riddled empire to find the magician who can renew the spells that keep their valley safe.

This was, effectively, another car story, though I told it on foot. For several of our daily walks with the dogs Robin had been brooding about something that had been bothering her, and eventually she asked me to tell her a story to take her mind off it. I thought for a bit and came up with one about a couple of kids getting back into the middle ages and rescuing a woman from being drowned as a witch - standard run-of-the-mill fantasy, OK for what it was, but no more. It didn’t stop the brooding, so I began on another. I thought I’d have a go at Robin’s own genre, high fantasy. Unicorns are an obvious prop, so that’s where I started (Robin told me later that she detests the unicorn myth, with its utterly passive female unquestioningly abetting the male in destroying this marvellous creature.)

This lasted a number of walks, and acquired a book-like dynamic of its own, so much so that I found myself at other times in the day thinking about the expanding possibilities of what might happen next, and discovering places where I could re-use as functioning machinery some of the standard magical props I’d thrown in earlier as decoration. Original elements occurred to me along with the stock stuff, and when I finished Robin told me she thought I had a book there. I thought so too, but I put the writing off, knowing from the first that it wasn’t going to be easy. I’d been there before with my other car stories.

There are two main problems with car stories. First, you already know most of what is going to happen and you no longer have the excitement of discovery to spur you on. Few surprises wait for you round the next bend. (Mrs Jones in Tulku is very much the exception, and it’s significant that she, for most readers, provides the central energies of the book.)

Secondly, you find that in telling the story aloud you’ve got away with all sorts of stuff that won’t stand up in print. You are dealing with a construction kit some of whose parts are missing while many of the rest don’t fit, and when you attempt to adapt one to do so, it distorts its fit with something else, while the whole thing seems to lack any internal girderwork to support the structure. I remember the struggle I had with The Blue Hawk, and how late in the rewriting I was able to explain satisfactorily to myself what the Gods actually were and hence how social structure of the Kingdom had come into being and was now breaking down. I don’t have to explain such things in detail, but the reader has to believe that I could, if asked - I wish I thought Tolkien had a coherent idea of the economics of Middle-earth.

I had this second problem with The Ropemaker, and in spades, because in high fantasy you have two sets of coherence to get right. First, the everyday world in which water boils at boiling point and things weigh what they weight and bullets kill you; and second, the equally demanding world of magic, which may at first glance seem totally liberating, but in fact is just as constricting in its own way as realism. And then these two worlds have to mesh at the places where they touch. Between these two demands there seems to be less and less space for the story to work itself out, though of course it can be even more satisfying for the reader when it does so with apparently effortless ease. I’m still too conscious of the problems I had to be able to tell whether I got that right.

Dickinson works his own magic in a thoroughly compelling tale that delves into the nature of both magic and time. Booklist (Starred)

Readers who are willing and able to fall into step with its majestic pace will be rewarded by a thought-provoking trek through a fairy tale world that is as breathtakingly fresh as it is archetypal.... A challenging magical adventure for the thinking reader. Publishers Weekly

...the craft with which Dickinson constructs his conclusion fully matches the promise of his ambitious framework. Horn Book

Fascinating questions about time are posed, and there is much for young people to think about here. As much as anything, this book is about the power of story and the influence it can have on ordinary people's lives. School Library Journal

The story is told in rich, evocative language with echoes of archetype and myth. Mythopoeic Society

This is an unusually satisfying fantasy...Suspense continues to build, with an ending that is harmonious with the plot, setting, and characters. For fantasy fans, a spellbinder. Kirkus Reviews