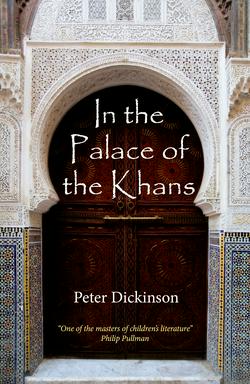 In the Palace of the Khans

Dirzhan is a strange little country up among the mountains way out east. It has one foot in the middle ages and one in the age of the internet, and its President Kahn is a ruthless modern dictator who lives in a fantastic old palace riddled with secret passages. Only the old eunuch who looks after the Kahn’s daughter Taeela knows where they run.

Nigel is on a visit to his parents when he is asked to spend time with Taeela to improve her English accent, so he is actually present when the Kahn is assassinated in front of their eyes.

Now those haunted passages come into their own, allowing them to escape from the palace and make their way through a country in turmoil, find allies up in the mountains and return to the palace by the way they came with a band of followers, so that Taeela can avenge her father’s death.

In the Palace of the Khans was nominated for the 2014 Carnegie Medal.

Stories have a life of their own. They have to, if they’re going to be any good. I’d been thinking about an old man, the last of the eunuchs, living in a fantastic palace riddled with secret passages somewhere way out east, surviving while khans and commissars come and go because he knows his way through the maze. It was going to be a crime novel, but I wasn’t getting anywhere, hadn’t written a word, in fact. All that had happened was that I’d become more interested in the palace itself than the old man. I then realised that to make the most of it I’d be better off with an adventure story than a crime novel.

So I needed a hero, or a heroine, or both. Teen-age, of course. Start with the hero, give him a name. Nigel? Sounds like a geek, or a wimp, or both. (First sign of the story coming to life.) All right, so that’s what he is. Got to get him out to this country—it’s called Dirzhan, apparently, and its president is a ruthless dictator because that’s what seemed to be happening to some of those states that were born when the USSR fell apart— and then into the palace, somehow. So presumably his parents are in Dirzhan because his father has a job there and he’s gone out to visit them in his school holidays and meanwhile his father has met the president … you know, it’s beginning to look as if Nigel’s father is the British ambassador in Dirzhan, so of course he’s met the president and by way of small talk he’s said that Nigel was coming and the president has asked if Nigel could spend a bit of time talking to his daughter to improve her English accent …

So that’s why Nigel is inside the palace, waiting for a door to be opened. And it is, and there’s the heroine, Taeela. I barely have to think about her. She’s all there, ready to go, ready for the adventure to start.

A new book by Peter Dickinson is always something to be looked forward to. 'In the Palace of the Khans' is very much vintage Dickinson, marrying as it does serious contemporary themes with exciting, almost Boy's Own adventure...This is old fashioned storytelling at its best presented in a clear, lucid, contemporary style that respects the intelligence of its young teenage audience. Books for Keeps