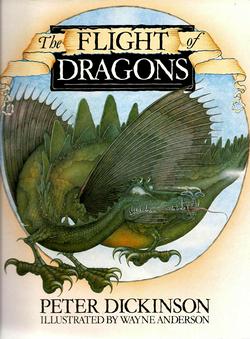 The Flight of Dragons

Cult classic about how dragons flew

Pseudo-scientific monograph dragons as nature’s only attempt to evolve lighter-than-air flight, working all the “known” facts about dragons into a single theory, starting from the fact that they are far too big to be capable of winged flight. Illustrated by Wayne Anderson.

I was on a train, looking at a dragon on the cover of an omnibus edition of Ursula Le Guin’s Earthsea trilogy (as it then was). This one had a bulky body and rather stubby wings, which obviously would never get it airborne, let alone with the two people it was carrying on its back, and all its own weight of muscle and bone. Obviously any lift had to come from the body itself. Its very shape suggested some kind of gas-bag. I thought about it for the rest of the journey, and on and off for a couple of days after, and at the end of that time had managed to slot everything I knew about dragons — why they laired in caves, around which nothing would grow and where hoards of gold could be found, why they had a preferred diet of princesses, how and why they breathed fire, why they had only one vulnerable spot and their blood melted the blade of the sword that killed them, and so on — into a coherent theory that explained why these things were necessary accompaniments to the evolution of lighter-than-air flight. The result was as pleasing as a completed jigsaw, so I wrote it out, thinking I might end up with the sort of small comic pamphlet people give each other at Christmas as a stocking-filler. My agent, however, sent it to an ambitious young publisher-packager who had other ideas. He commissioned some juicy great dragon illustrations from Wayne Andersen and travelled the world selling the concept for amazing sums to a number of big-time publishers. Alas, he over-reached himself in a number of ways. He’d promised the buyers a book a great deal longer than Wayne and I had provided, so that I had to invent a dozen extra pages with only a week to do it in, and the designer had to stretch Wayne’s pictures by ingenious re-use of details. And, alas, our publisher also began to overstretch himself financially, and eventually went bankrupt. But in the meanwhile he had also sold the concept to a company making animated cartoons for TV. They bought it sight unseen, without apparently realising that there was no kind of a story or plot in what I’d written. Undeterred they went ahead and bought the entire plot of The Dragon and the George from its author, Gordon Dickson. The film seems to get shown pretty well every Christmas. Scraps of my theory crop up here and there, and the hero is named Sir Peter Dickinson (nobody asked me, of course) but that’s all I have to do with it. I don’t even make any money out of these repeats, but I bear no grudge. I’d still earned more from my silly little pamphlet, before the crash, than I’d done till then from any of my other books. OK, life is unfair, but not always to one’s own disadvantage.

It was reprinted in paperback in 1998 (Paper Tiger UK, Overlook Press USA) but if you’ve got a copy of the original edition anywhere, hang on to it. It’s one of those mad cult classics.