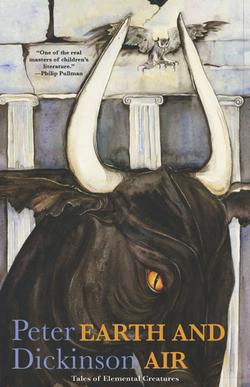 Five stories concerning the magical creatures of those two elements—a troll, three-headed Cerberus who guards the underworld, a witch’s broomstick, a gryphon and Athena’s owl; plus a sixth concerning an element we have only just begun to explore—space itself.

Mining folklore for ideas is routine in modern fantasy, but not many can add the surprising twists and novel logic that Peter Dickinson does. These are beautiful stories, deft, satisfying, unexpected. They deserve to become classics of the genre. The Wall Street Journal (September 15, 2012)

These unusual, memorable tales from a much-admired writer should appeal both to teens and Dickinson’s adult fans. Publishers Weekly (30 July 2012)

Suspenseful, frequently violent, sometimes comic, and with Dickinson's usual command of imaginative imagery and beautifully tooled language, this is a fitting capstone to the series Horn Book Magazine Reviews (2012 #6)

Read it with your mind open, senses alert… and prepare for a marvelously bumpy ride. Locus