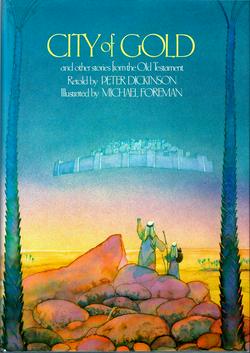 Retelling of Old Testament stories using the voices of imagined contemporary narrators, who will have told them for reasons rooted in the belief- system and culture of their own times.

My UK editor, Joanna Goldsworthy, called me to say that Gollancz were running a series of stories and legends illustrated by Michael Forman. They’d done Grimm and Hans Andersen, and wondered if I’d be interested in doing the Old Testament stories. I told her she was mad (a) because there wasn’t any longer a voice in which you could do this — you had a choice between fake high-style and utterly inappropriate modern, and (b) they weren’t that kind of story, to be told for amusement with glossy illustrations. They had power still. They were part of many people’s deeply held convictions. I told her I wasn’t going to do it, and she wasn’t to ask anyone else. Twenty minutes later I called her back and asked her if she’d tried anyone else. No, she said — she’d been too scared. I told her I’d thought of a way of doing it. (See above. NB I am not myself a believer.) I was happy with the result, but at the same time flabbergasted when the book won the Carnegie Medal When I’m asked what sort of books I write I say the sort that adults think children ought to read. That isn’t my purpose. I intend them to be enjoyed, but I admit that a lot of my reviews contain the dreaded word “demanding”. City of Gold is an extreme example, so there was a good deal of grumbling about it winning the medal, which I had some sympathy with, but not enough to refuse the medal.