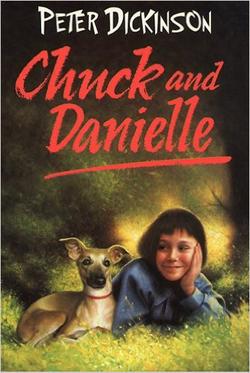 Chuck is a whippet. A very nervous whippet, who’s scared of everything: paper bags, pigeons, supermarket trolleys, cats (even the little fluffy ones). Some people say Chuck is a wimpet, not a whippet, and Mum keeps pretending that she is going to give Chuck away, but Danielle loves her scaredey-cat whippet and knows that there is more to Chuck than meets the eye. Seven funny, charming and totally whippet-friendly stories.

All three of our whippets were small for the breed, but Hazel was a runt of runts, an almost ludicrously pretty little dog with a pedigree going back to the Dark Ages. The other two were more plebeian, and not much nuttier than most dogs, but Hazel had a hundred generations of nuttiness inbred into her. We could, as it were, read the craziness of the other two, but Hazel was crazy in Etruscan. Mostly we had no idea where she was coming from. One bit of this that we could get somewhere near was that in any group situation she was in her own mind bottom of the heap. If ever she had got on social terms with a beetle she’d have assumed the beetle was boss. Presumably in her first formative weeks, being the runt of the litter, her siblings and mother always shoved her away from the teat. And though she was physically brave, and much more of a stoic than the other two, inexplicable things terrified her. A Harley Davidson thundering up from behind one could understand, but dock leaf fluttering by the path was just as bad, or a rusty old farm implement lying in the corner of a field. With the Harley and the dock leaf she’d shoot sideways, like as not between your legs. With the bit of rusty junk she’d slink round behind you as you passed, hoping it wouldn’t see her, and go on doing that every time we passed, years after the menace has been removed by the farmer. She did her Harley trick and had me over into the traffic once, which was so scary that Robin didn’t even have the heart to swear at her, and a couple of days later she did the dock-leaf trick and had me over again, though this time it was only into the mud, so Robin could swear herself blue in the face, finishing by saying that when we got home she was going to turn her into a hearth-rug. I told Robin no, because one day Hazel was going to save the universe. Robin made rude noises, but I started fantasising about how it could be made to happen. That same evening a friend called Robin from the States for one of their marathon transatlantic chats, and for something to do I settled down and began to write what turned out to be the first story in a book about Chuck saving the universe. It went so well that I began to think I’d get it done before the call was over, but I didn’t quite make it. The rest followed over several months. We called Hazel Chuck when we didn’t want her to know we were talking about her, but she was pretty bright and I think she sussed it out. I was astonished by the intensity of my feelings when she died three years ago of a wasting disease resulting, we think, from over-vaccination in puppyhood. (For some reason you need to be careful with whippets.) The loss of a loved human is an immense and complicated network of sorrow. The loss of a dear pet is a narrow, focussed beam of pure grief. The other two died within a fortnight of each other three years later.

A Winner of the 1997 UKRA Book Awards

Dickinson creates a cast of deftly delineated characters, human and otherwise, and his dog's- eye view of their seemingly unpredictable antics is both credible and delightful. Hats off to a winning canine antihero. Kirkus Reviews