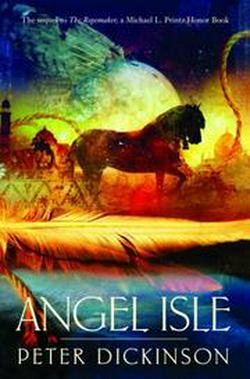 Sequel to The Ropemaker, which finishes with an epilogue set twenty generations after the main story, describing runaway Saranja returning to Woodbourne, only to find it gutted by fire after a raid by the northern horsemen, because the magic that protected the Valley has now collapsed. The prologue to Angel Isle is identical, and the story is again a quest, but one which turns out very differently.

I’m a much slower writer than I used to be, and I cursed myself many times for tackling something of this size at my age, but I’m glad I did. The Ropemaker doesn’t seem to me to have much by way of a central moral spine, but this story seemed to grow one as it went along. It is about the corruption of power, both in the symbolic form of the magical power that once again has total control of the Empire, and also as political domination, the Empire itself being under attack by an aggressive, scientifically advanced mercantile confederation from overseas. The war in Iraq was just getting under way when I started, and there are some deliberate parallels with that, in the mutual incomprehension of the two sides, but that’s not all the book is about. Despite the effort it was in the end fun to write, and I hope it’s a fun read.

Throughout, the author's command of language treats the reader to robust descriptions and rolling narration, making the whole a bravura performance of created worlds and rock-solid plotting sure to please fantasy lovers. Horn Book Magazine

Dickinson returns to his beautifully created, four-dimensional universe for another perilous adventure....the complex, multilayered story includes more heady explorations of time and magic, joined here by thoughts on the meaning of true love. This is sure to be a hit with fans of the earlier book...an enchanting reading experience. Kirkus (Starred review)

The complex and intricate plot illustrates just how artful a writer Dickinson is, as he builds tension through the difficulties the protagonists face—magical, political and personal. Booklist