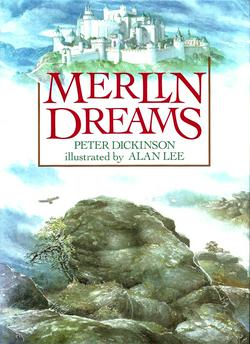 Stories on Arthurian themes linked by a framework of Merlin drowsing the centuries away under his rock, waking from time to time and recalling some item from the mythic Celtic past, and then dreaming a story suggested by it. It was fun. Illustrated by Alan Lee.

Joanna tried again, this time with the King Arthur stories. I said I’d give it a go. I thought I’d do much the same as in City of Gold and go back to the original Celtic roots and tell the stories from that end, progressing up the tree through trunk and branches to the final astonishing flowering in Malory and the romancers. I couldn’t do it. The tree wasn’t there - nothing between the vaguely perceived roots and those flowers. You can still trace a few of the connections - the frequent jousts at wells or fords going back to the priests of the holy springs whose successors must kill them in order to take over the priesthood - but there wasn’t anything from which to make the stories as we now have them. So I was driven back to old Merlin dreaming. This was liberating, freeing me from the straitjacket of the existing stories, and allowing me the fun of inventing my own. One of the many ways I’ve been lucky as a writer is having Michael Foreman, Alan Lee, Wayne Andersen and Emma Chichester Clark illustrate my books, with generous amounts of colour. These are all really lovely books.

In this inspired collaboration, the distinguished British author, who writes for children and adults, and an illustrator closely associated with medieval and chivalric images imagine some of the medieval magician's dreams. Splendid, rich read-aloud stories for older children and those in the thrall of fantasy who may not be chronological children. New York Times (April 9, 1989)